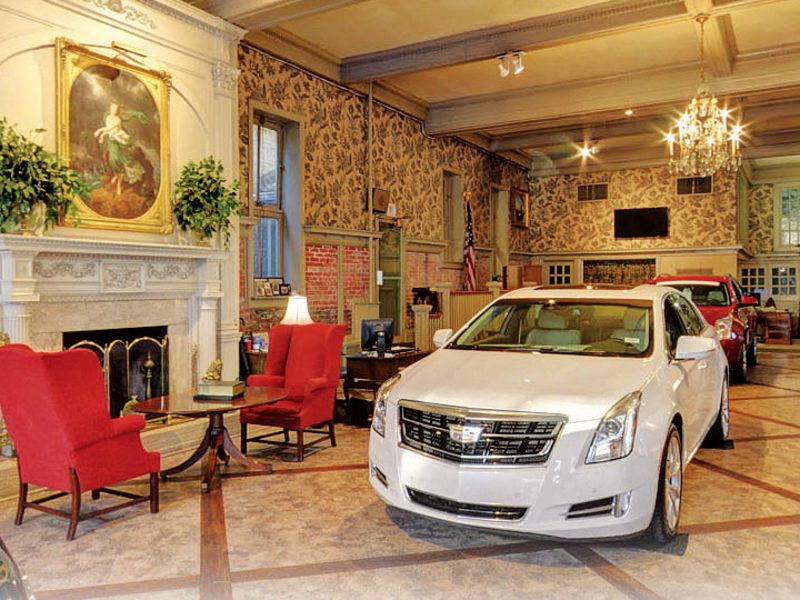 With gold chandeliers, stained-glass windows and a marble fireplace, Brown Bros. Cadillac looks nothing like a typical dealership.

“I’ve been told by a number of people that it looks like the lobby of a fine Southern hotel,” said Gary Brown, who now owns the dealership with his brother. “I think her aim was to make it a very comfortable, stylish place to buy a Cadillac. At that time, Cadillac was still the dominant luxury car in America.”

But Cadillac’s dominance ended two decades ago, and in two weeks, downtown Louisville will be without a Cadillac dealership for the first time in more than a century. The Browns are among the more than 175 Cadillac dealers who have decided to take a buyout instead of going along for the ride toward an all-electric future.

Most dealers who accepted buyouts, which in some cases are more than $500,000, have until the end of the year to give up their franchise. Brown Bros. isn’t waiting around. It sold its new inventory to a nearby store and set a closing date of Feb. 15.

“Once I made up my mind that that’s what we were going to do, it just made sense to conclude it as quickly as good judgment dictated,” said Brown, 68, who declined to discuss the terms of his buyout because General Motors required takers to sign a nondisclosure agreement.

Meanwhile, on the West Coast, Inder Dosanjh, dealer principal at Dosanjh Family Auto Group, is committing big money toward GM’s EV future. Dosanjh’s group in the San Francisco Bay area has one Cadillac store with the necessary upgrades already in progress. It’s on the same campus as a Chevrolet store, and Dosanjh is the top-selling Chevy Bolt EV dealer in the U.S. His other three Cadillac stores will go through assessments, and he expects the upgrades to cost $150,000 to $200,000 at each.

“It’s a positive change,” Dosanjh said. “We’ve got to go there, so we might as well go there — really lead everybody into it.”

Cadillac last week sent its roughly 700 U.S. dealerships that are staying on board a letter explaining their steps toward preparing to sell and service EVs before the Lyriq, a battery-electric midsize crossover, arrives in showrooms early next year.

Cadillac is working with ABM, a provider of electrification solutions, to assess necessary upgrades and costs for each dealership. Cadillac expects the facility updates to cost about $200,000 on average and hopes to complete all assessments by midyear, said Mahmoud Samara, vice president of Cadillac North America.

“There’s an entire infrastructure, an entire ecosystem, and it’s different dealer to dealer. That’s why we have required that every Cadillac dealer go through this assessment … and more importantly, offer them the turnkey” solution, Samara told Automotive News.

Preparing for EVs is a priority for Cadillac and its dealers this year, but Samara also plans to improve dealership profitability, enhance customer service and grow business for dealers by boosting parts and certified pre-owned vehicle sales, for example.

The Browns’ father, Morris, and uncle Orville opened a downtown Louisville used-car store in 1946 called West Broadway Motors. The brothers acquired the Cadillac franchise in 1976 and moved it to the store’s current location.

The building was constructed in 1900 and has always been a Cadillac dealership, Brown said. It’s gone through three different owners, starting as Standard Cadillac in 1902. It also housed other brands, including LaSalle and Chevrolet.

Gary and Bruce grew up in the business. Their father believed in learning it from the bottom up, “which turned out to be the best way to do it,” Gary Brown said.

In the 1950s and ’60s, dealers sold Chevys, Fords, Cadillacs, Buicks and Oldsmobiles in the heart of Louisville, he said.

Today, the only other franchised dealership downtown is James Collins Downtown Ford Louisville across the street. The Cadillac store that bought Brown Bros.’ new-vehicle inventory is about 12 miles away in a motor mall.

“As time went on and life moved to the suburbs, automobile row moved,” Brown said.

Used vehicles have made up the majority of Brown Bros.’ business in recent years. Sales hovered around 150 new and 350 used vehicles per year, Brown said.

Cadillac’s transition to electric vehicles and a fair buyout offer were factors in the decision to close, along with many other considerations, he said.

“The timing was right for me and my family,” Brown said. “It wasn’t any one thing. It was a number of things that sort of came together at the same time.”