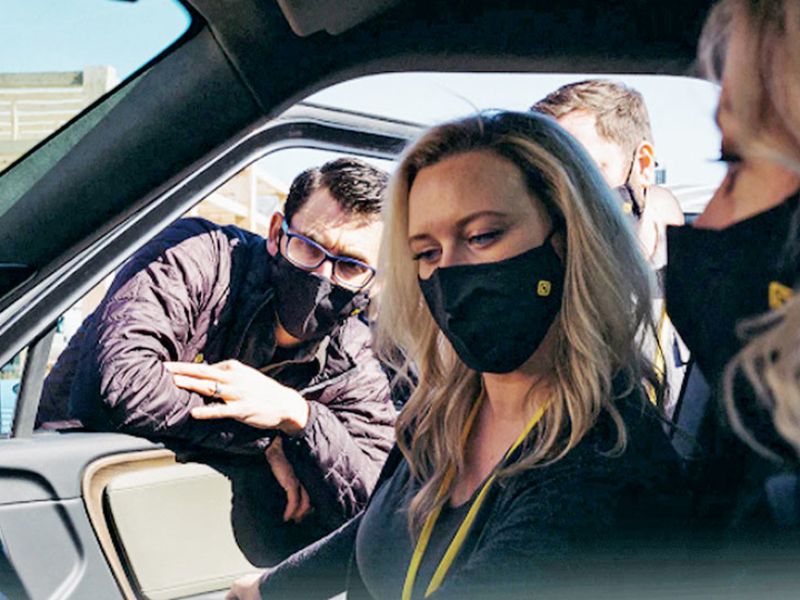 It’s still possible to get a live person on the phone at Tesla. But it’s not easy. There will be menus and waiting and recordings to endure. And you might be transferred down a blind alley only to be left frustrated. It didn’t used to be that way. Tesla once won rave reviews for its personalized customer service. Engineers chatted with customers. CEO Elon Musk often personally answered customers’ questions on Twitter.

But then Tesla’s sales took off — it became the world’s most valuable automaker — and the personal touch was replaced by bots, blogs, FAQs and emails. Now, the posts in blogs have an angry tone from some owners.

Rivian, about three months from its first deliveries, aims to maintain close communication with its customers.

The company last week said each customer will be paired with a “Guide” for the entire length of ownership of a Rivian R1T pickup or R1S SUV. The Guide, stationed on the factory floor, will have access to engineers and production personnel. They will be just a phone call away to quickly answer customers’ questions, from finding the nearest charging station to configuring the infotainment system.

Speaking directly to early customers in a video posted on Twitter, CEO RJ Scaringe said: “The Rivian Guides program makes sure that every one of you has an individual, a person you can call or email and ask any questions and provide any feedback, you can go to for anything Rivian. These guys have spent a ton of time getting to know the product, getting to know the company. They’re passionate, energetic and can’t wait to spend time with you as you go through your entire ownership process.”

But the challenge for Rivian, analysts say, is keeping the lines of communication not only open, but easy to use and able to deliver fast answers once the company has tens of thousands of vehicles on the road.

“In my humble opinion, Rivian is wildly underestimating the number of calls they are going to get,” said Laurie Foster, founder of dealer consulting firm Foster Strategies.

“Rivian will have people hitting the panic button over a noise or a lack of a noise,” she added.

“Where is the charging station? How do I maintain this? How do I configure this on my own? Capacities. Everything. Everything about these vehicles is going to be different.”

If Rivian gets it right, the Guides could pay dividends.

“In automotive, people don’t feel as if they have a straight line of communication. When you call a dealership today, sometimes the receptionist doesn’t understand their question or puts them on hold or sends them to the wrong department,” said Foster.

“And then customer fatigue and abandonment of those calls is very high. If Rivian can actually deliver on that, there are a segment of customers who are going to feel that’s red carpet treatment to what they’ve had before.”

Rivian would not provide details on the number of Guides who will be taking calls when the first R1T pickups are delivered. But Mast said the Guides won’t have any duties other than to interact with customers.

“Being a Rivian Guide is a full-time job,” she said. “To start, all Rivian Guides are based in Normal, Ill., at our manufacturing facility. It’s important to us that each customer feels like they have someone to connect with … all the way through their ownership experience.”

“With a brand-new vehicle from a new company with first-time customers, I think it is a brilliant idea for these Guides to provide assistance and answer questions. To give customers that experience is a really smart thing to do. The challenge with this is that it works great at first. But it’s not something that is going to scale,” he said.

Being tweeted at millions of times per month, Musk — who has 49.2 million followers — still occasionally answers customer questions on Twitter.

Scaringe, with 25,800 Twitter followers, might find it somewhat easier to personally respond to his customers — for now.