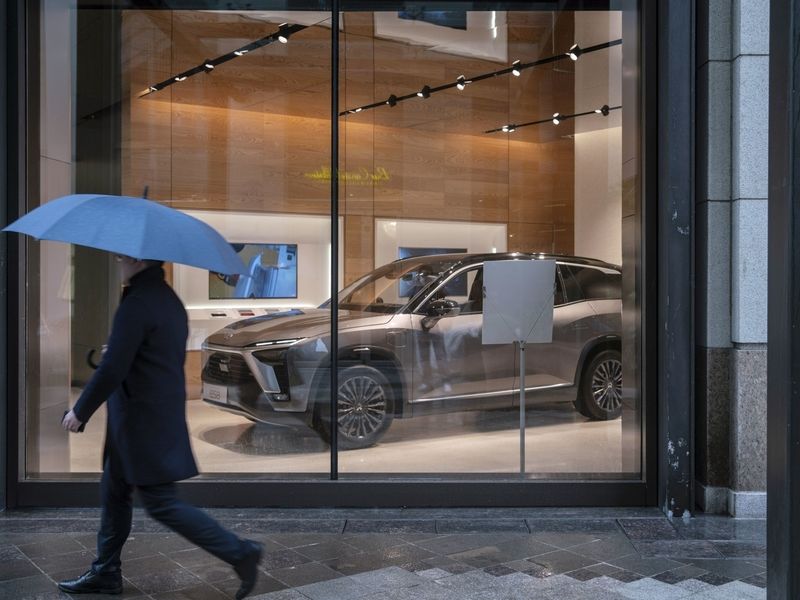 China’s electric carmakers are paying top-dollar rents to open showrooms in luxury malls, as they seek to gain an edge in the hyper-competitive market.

More than half the malls in Shanghai have at least one electric-vehicle showroom and more are planned, according to real-estate service provider Jones Lang LaSalle Inc. They are now part of the “standard configuration” of shopping centers in medium-to-large cities, the firm said in a recent report.

With dozens of EV makers in various stages of development jockeying for a slice of what is the world’s largest EV market, upstart brands like Nio Inc. and Xpeng Inc., and the new-energy arms of SAIC Motor Corp. and Geely Automobile Holdings, are staking out ground in malls to burnish their image as premium goods for the middle class and differentiate themselves from more established automakers.

“They pay big rent because they want to be seen,” said Zino Helmlinger, head of retail in eastern China at real estate firm CBRE Global Inc. “In China, you have many EV brands competing for a still very small market share, and every two-to-three months there’s a new car released. It’s crazy.”

The influx of EV makers to shopping centers is also a boon for mall owners who are looking for a new breed of tenants as sales of shopping center drawcards such as clothes, shoes and electronics increasingly shift online. EV makers tend to want space on the first floor — which is also usually the most expensive — to attract passing shoppers, and also for ease of access for display cars and test drives.

“There’s an overlap between the target consumer groups of electric vehicles and premium commercial developers,” said Vivian Zhu, director of retail at JLL Shanghai. “Those middle-class visitors who tend to shop for cosmetics or luxuries on the ground floor are also regarded as potential buyers for a Tesla or Nio.”

Electric-vehicle demand in the world’s biggest car market is forecast to soar in coming years as consumers embrace cleaner automobiles and the cost of EVs tumbles. Research firm Canalys said in a report last month that EV sales in China may climb more than 50 percent in 2021.

To be sure, the likes of Nio are stepping back from the splashy club-style “Nio House” showrooms that sought to embed the carmaker into a customer’s life, after burning through cash. Its flagship Shanghai outlet, opened in the upscale HKRI Taikoo Hui mall in 2017 before it even started mass production, included a library, art gallery and open kitchen to entice customers with a high-end lifestyle that would come from buying one of its cars.

It has since focused on opening smaller Nio Spaces, which are about a tenth of the size of the Nio Houses and more akin to a typical showroom, without the added lifestyle benefits. It plans to open about 120 this year. Having temporarily suspended developing more Nio Houses during a cash crunch that threatened to sink the company, it now plans to open 20 more this year.

“We have significantly lowered the operating cost of Nio Houses,” CFO Steven Feng said on an earnings call last week, when the company reported a wider-than-expected loss. “It’s only about 40 percent of the original cost.”

The expansion of showrooms into malls “is in line with automakers’ product development,” said JLL’s Zhu. Those that have missed their original targets for product launches or mass production have faded from key city areas. What was once the Shanghai display room for Byton, which has delayed production plans several times, now houses the flagship store for Xpeng, which delivered more than 27,000 vehicles last year.

“EV companies are now way more cautious with the location they open,” said CBRE’s Helmlinger. “Three years ago they were trying to break the market. Now, they’re very selective with the mall. It’s quality over quantity.”