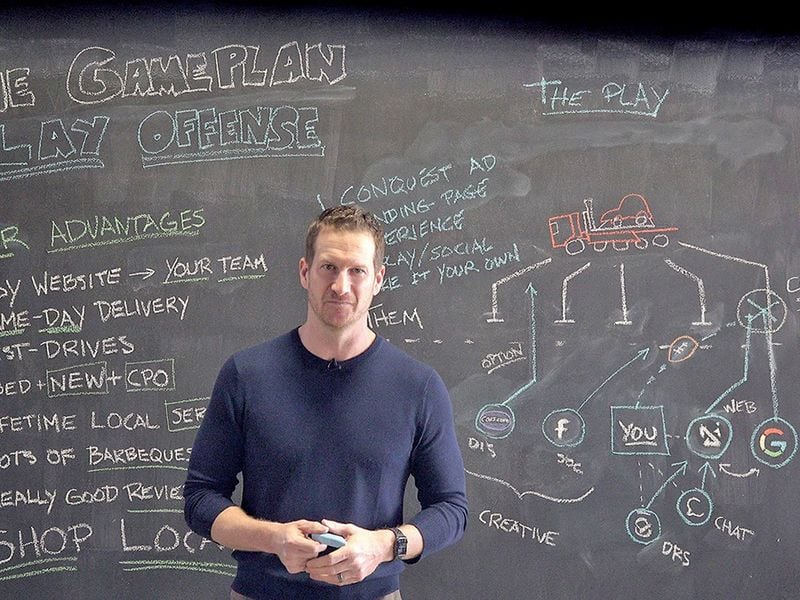 Through a customer retention program it calls its Gold Club, the Oakhurst, N.J., dealership is committing to being better at providing a convenient experience, said Bill Camastro, a dealer and partner in the dealership, which is part of Serra Automotive.

It’s also a way dealerships can compete against online used-vehicle upstarts such as Carvana and Vroom, Camastro said — by being just as good at providing the services the rival companies offer, and by offering more.

That is, if customers know they’re available.

“All Vroom and Carvana really did was point out to us that, ‘hey, you guys aren’t very good at this, so we’re going to live in that space,’ ” Camastro said. “I hope every car dealer in the country saw that commercial, to be honest with you. All it’s going to do is improve them.”

He’s referring to Vroom’s Super Bowl ad, which has ruffled more than a few feathers at franchised dealerships since its debut. Dubbed “Dealership Pain,” the 30-second spot depicts a car salesman threatening a customer, who is begging to leave, with an electric shock before flipping to an image of the customer relaxing on his lawn watching Vroom deliver a sedan.

Vroom says the ad was conceived as an exaggerated and humorous take on some consumers’ dissatisfaction with traditional dealerships.

Franchised dealers see it differently. They say it perpetuates old stereotypes no longer rooted in reality — scenes that simply aren’t possible today because shoppers have access to more information and more choices on how and where to buy a vehicle.

Yet several dealers and retail marketing providers told Automotive News those images may persist in part because dealers have not been as good at telling customers they, too, can transact online and deliver vehicles to their driveway, and that may have opened the door for newcomers to take command of the message.

Ideas differ on how — or even whether — dealerships should respond.

“We should, as an industry, be highlighting the good things we’re doing, our contribution to the economy, our employment, the community efforts,” said Jim Press, a senior adviser to McLarty Cos. and Hyundai Motor North America.

The National Automobile Dealers Association, state associations and automakers should play a role in such an effort, Press added.

NADA’s 2021 chairman, Minnesota dealer Paul Walser, said that the way dealers win consumers’ business is to continue to invest in their processes.

After Vroom’s ad aired, “people talked about, ‘Do we need to do something? Do we respond to this?’ And at the end of the day, my conclusion was we don’t need to say anything,” Walser said.

“Car dealers are improving materially over time. We’re addressing the consumer concerns that are out there and providing better experiences, and honestly, I just think that’s the way we win,” he added. “Would a great advertising campaign provide more business? Maybe, but I think our energy is best spent continuing to do what we do and just keep doing it better and better all the time.”

Franchised stores are more capable of transacting online and outside of a dealership today than in years past, given how the coronavirus pandemic accelerated the transition.

At the same time, website visits for companies such as Carvana have increased for several years in a row, according to Cox, which called 2020 a “breakthrough year” for awareness and traffic. Online used-vehicle sellers entered the fragmented market with a vision to make buying a vehicle as easy as it is to buy nearly anything else, and they generally advertise a better, faster and easier experience than traditional dealerships.

Still, visits to dealership websites, while down slightly in 2020, outpaced Carvana and competitors by roughly 3 to 1, Cox found. If more consumers knew that dealerships could be as “quick and easy” as Carvana or Vroom, “that could potentially increase satisfaction even further,” Ton said.

Peter Scherr, chief marketing officer at Vroom, said via email that the company welcomes the industry’s digital shift, though he did not directly answer whether traditional dealerships’ ability to transact more online will make it harder for his company to differentiate itself in that way.

“We think any transition toward digital retailing in the industry is positive,” Scherr wrote. “This is the way consumers want to transact, whether in a pandemic or not, so to see the industry as a whole move in this direction is a good thing.”

Vroom declined to make Scherr available for a phone interview.

Scherr would not provide specific data about website traffic, leads and sales generated from Vroom’s Super Bowl commercial but said the spot was effective. It will continue to air as part of Vroom’s national cable, broadcast and digital media buys, he said.

“We saw the Super Bowl ad as comedic and hyperbolic, and we wanted to empathize with consumers about their negative dealership experiences and introduce Vroom as a better alternative,” Scherr wrote.

“Not only did data inform the core insight of the ad,” he added, “but we also did multiple rounds of consumer testing to ensure the ad was as memorable and effective as possible, as well as to ensure that we were striking the right tone with consumers in a particularly unique environment.”

Carvana spokeswoman Amy O’Hara declined to discuss the company’s marketing strategy but said its business model from the start was designed around online vehicle buying.

“If others are taking notice of that, that’s great,” she said, “but we’re continuing to focus on what we can do to set the customer experience standard very, very high.”

Franchised dealers often advertised pricing and incentives over experiences in the past, but it will be important to promote the convenience of new technology and digital sales strategies that will last once the pandemic is over, said Alexi Venneri, CEO of dealership marketing technology company Digital Air Strike.

It’s possible some consumers who bought their last vehicle years ago may not yet know how the dealership experience has changed, said Joe Chura, CEO of Dealer Inspire, a division of Cars.com that provides dealership websites and marketing tools.

Research bears that out. Half of all vehicle buyers did not know they could take an off-site test drive, according to a 2020 Cox study, while nearly a quarter of buyers who purchased a vehicle at a dealership didn’t know they could have applied for financing online.

Dealer Inspire developed a playbook for dealers to market their own experiences and play offense against new business models entering the market, rather than defend against claims that their model is outdated, Chura said.

“We’re laying it out for them,” he said. “They don’t need to think about, ‘How do I conquest a multimillion-dollar Super Bowl ad and how do I take some of that traffic that a company may be getting from that ad and tell my own story?’ ”

Seelye Auto Group in Kalamazoo, Mich., promises customers they’ll have all the information they need to make a buying decision within 45 minutes, said Chip Diggs, its Internet sales and marketing director. Shoppers also can complete as much of the purchase online as they wish and have the vehicle delivered to their homes.

“One of the big things that we have in our campaign is ‘exceed your expectations,’ and that was brought about primarily because of that [Vroom] commercial,” Diggs said.

“We understand that we never need to see the customer if they don’t want to see us,” he added. “We need to be able to get that messaging out.”