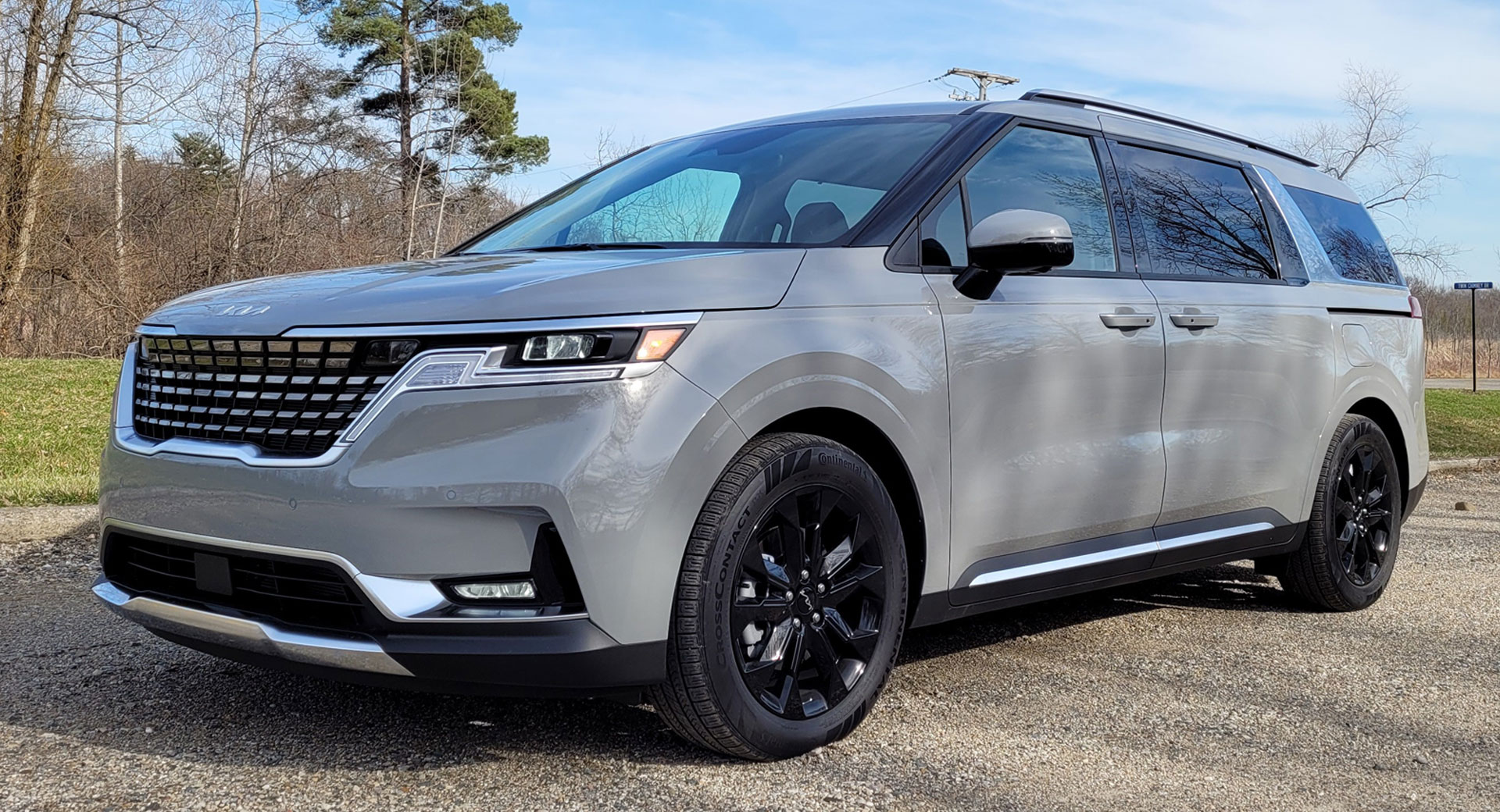 Decades ago, minivans were as American as apple pie. They dotted the landscape and countless owners loved them for their space and practicality.

However, minivans have fallen out of favor with consumers who have embraced crossovers in growing numbers. As a result, Ford and GM exited the segment and so did competitors such as Mazda, Nissan and Volkswagen. Even Dodge, whose best-selling product was the Grand Caravan, waved goodbye last year.

Despite this, the minivan segment has rarely been as interesting as it is right now. The Chrysler Pacifica and Honda Odyssey were recently given a facelift, while the Toyota Sienna was redesigned for 2021. Not to be outdone, Kia has retired the Sedona and replaced it with the all-new Carnival. 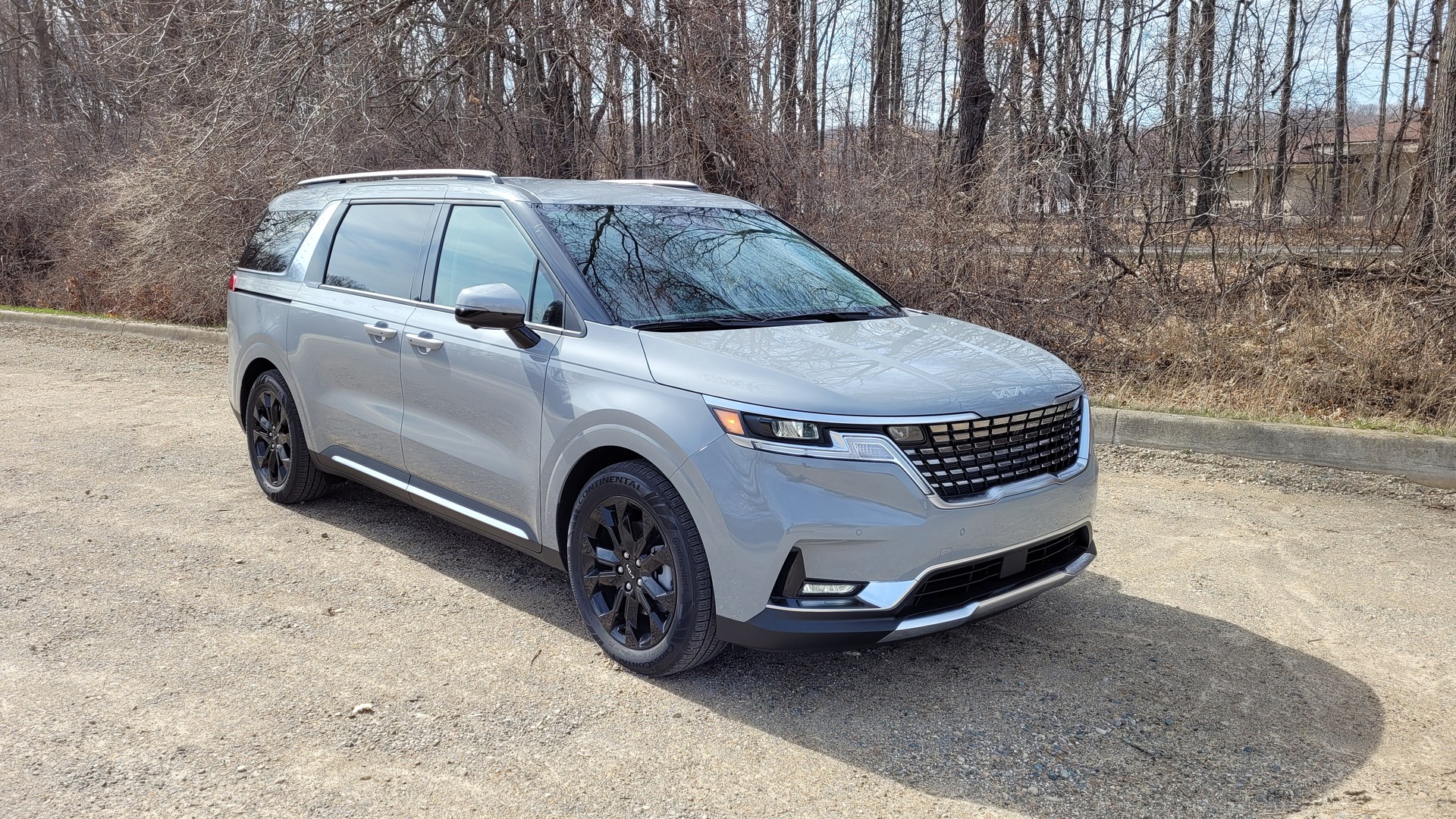 Since minivans are seen as uncool, the Carnival features a crossover-inspired design and is billed as a multi-purpose vehicle that “confidently stakes the claim between proper SUV and family hauler.” Or at least that’s what Kia says.

We’ll let that slide since hatchbacks and wagons are also pretending to be crossovers. In any case, it’s hard to argue with the Carnival’s looks. This is undoubtedly one of the best looking minivans as it has a stylish face, sleek lines and upscale bodywork. On top of that, there are blacked out A-pillars, a sloping roof and a distinctive silver accent on the C-pillar.

The Maybach Of Minivans 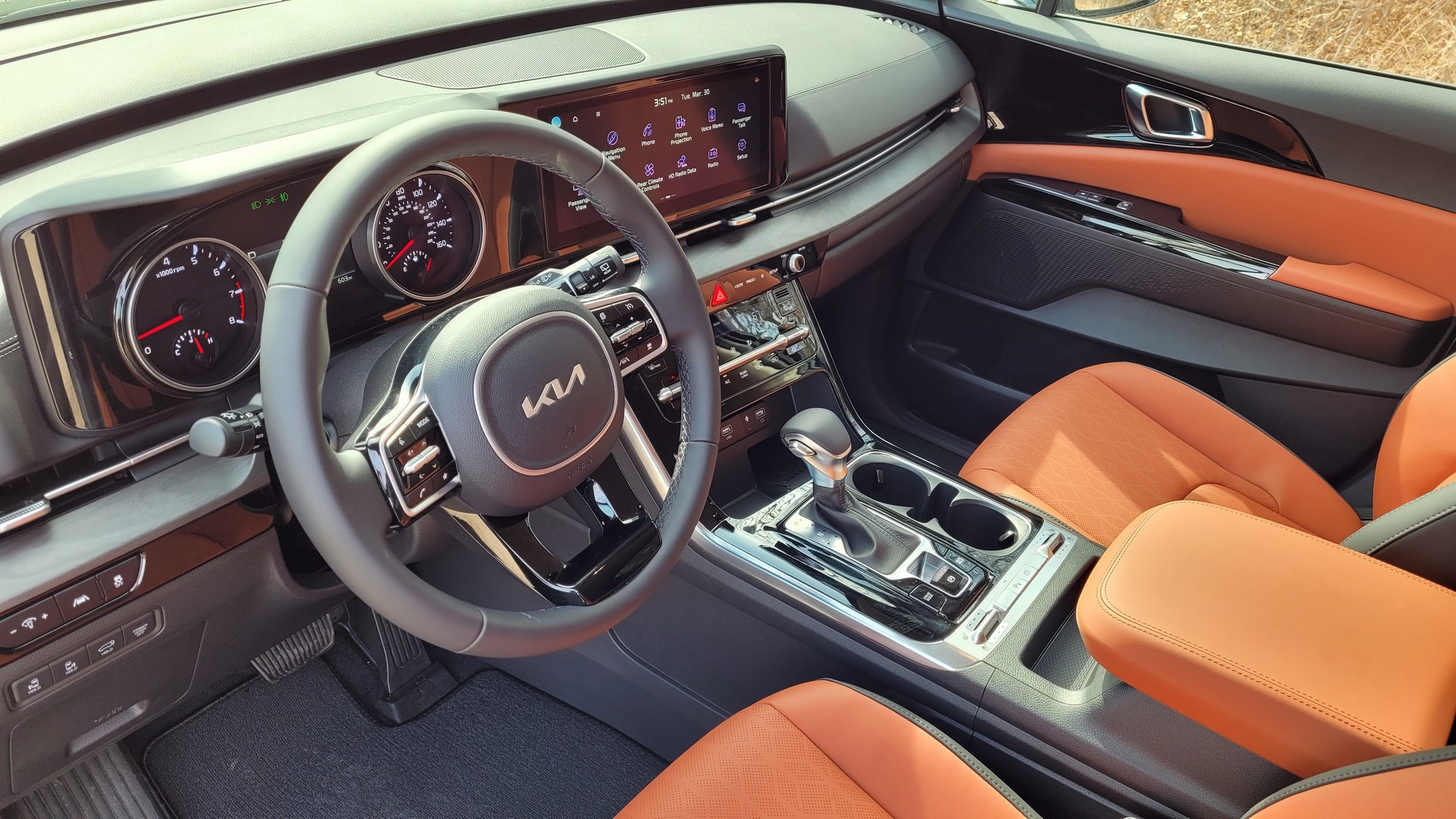 Kia’s interior design team is a force to be reckoned with and they’ve impressed us once again with the Carnival. While the cabin is reminiscent of the K5, it’s more luxurious as it features higher quality materials and slick climate controls. Drivers will also find acres of gloss black plastic as well as painted, woodgrain or 3D satin chrome trim. The gloss black is a bit overdone, but the cabin feels more premium than its sticker price would suggest.

Most versions of the Carnival have analog gauges, which are separated by a small but informative 4.2-inch display. A 12.3-inch digital instrument cluster is also available, but it’s limited to the range-topping SX Prestige. 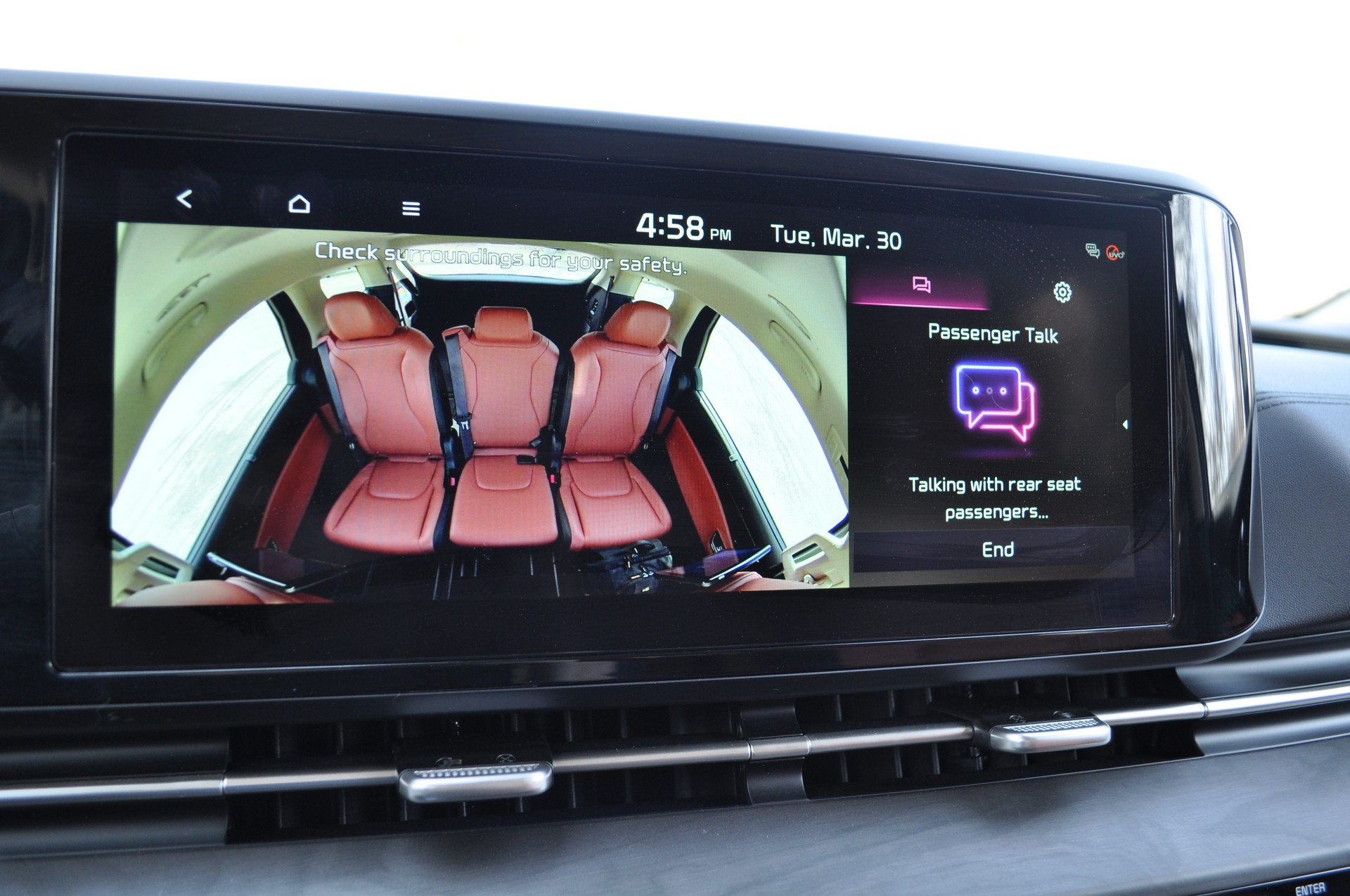 The larger display works well and there are dedicated ‘buttons’ to access commonly used screens such as maps, radio and navigation. The infotainment system should be familiar to Kia owners, but it has a handful of cool features including a cabin camera and an intercom.

The former shows a live video feed of the second and third row, while the latter projects your voice through the rear speakers. This means when your kids are fighting, you can see the guilty party and yell at them more effectively. When the little heathens finally fall asleep, you can use Quiet Mode to turn off the rear speakers. 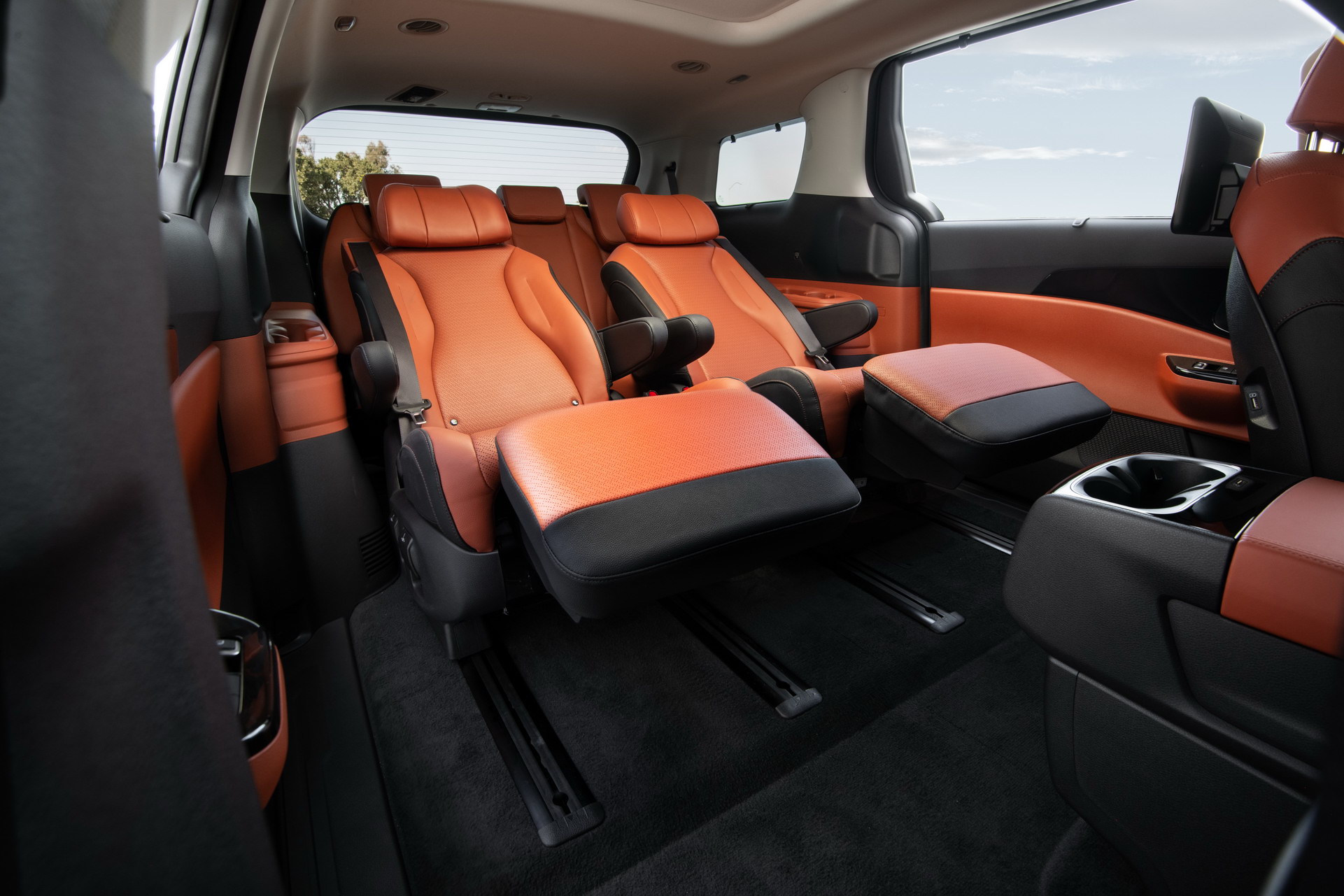 While those are interesting features, the Carnival is more notable for the VIP lounge seats that come standard in the SX Prestige. They’re Maybach-style second-row seats, which are power adjustable and feature leg extensions. They also boast heating and ventilation, so passengers can sit back and relax while watching videos on the dual screen entertainment system.

Minivans are known for their spaciousness and the Carnival doesn’t disappoint as there’s plenty of room up front. The second row is impressive as well as there is 40.5 inches (1,029 mm) of legroom. While the optional middle seat is a bit tight for adults, it’s highly flexible as it slides and features a backrest with a tray as well as cup holders.

On the downside, the middle seat comes slamming down when you yank on the pull tab. If you accidentally pull it from the wrong side and get your arm caught like this reviewer, little Jimmy and Johnny might learn some new four letter words. 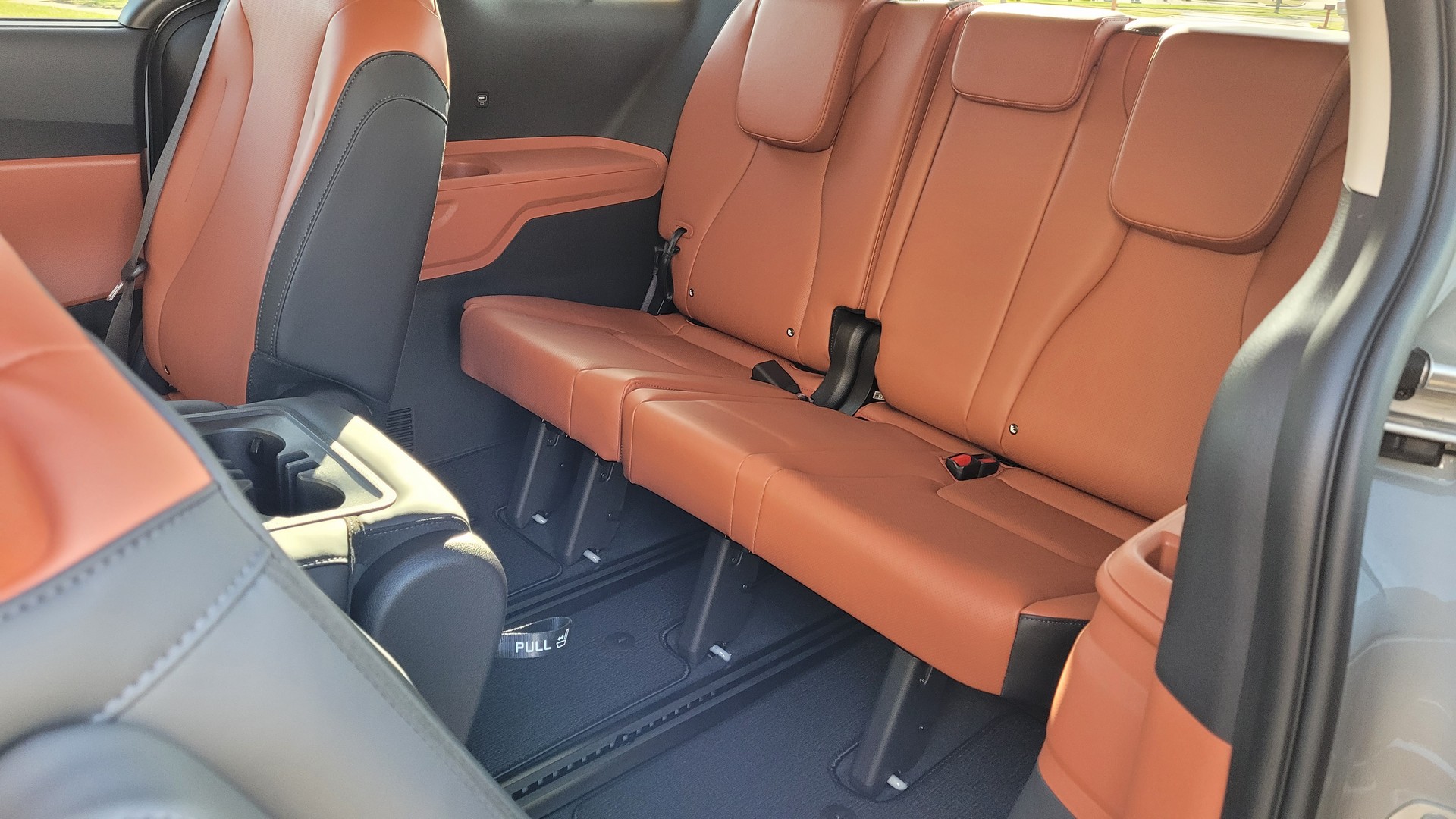 While I don’t envy anyone who has to remove the second-row seats on a regular basis, the third-row ones easily rise from the load floor. You simply pull up on a handle, pull back on a strap and push the seat forward.

With the rear seats in place, there are roomy accommodations for two adults or three small children. They’ll find 35.6 inches (904 mm) of legroom and enough headroom to keep this 6’ 2” writer happy.

Regardless of which row you’re in, you’ll find a USB charging port as the Carnival can be equipped with up to nine of them. The model can also be outfitted with two 110-volt outlets to power everything from refrigerated coolers to laptops.

If cargo hauling is more important than moving people, you won’t be disappointed as there’s 40.2 cubic feet (1,138 liters) of space behind the third row. Folding it down reveals 86.9 cubic feet (2,461 liters) of room and that can be expanded to a best-in-class 145.1 cubic feet (4,109 liters) by removing the second row. That’s a ridiculous amount of space and it even dwarfs the Chevy Suburban’s cargo capacity of 144.7 cubic feet (4,098 liters). 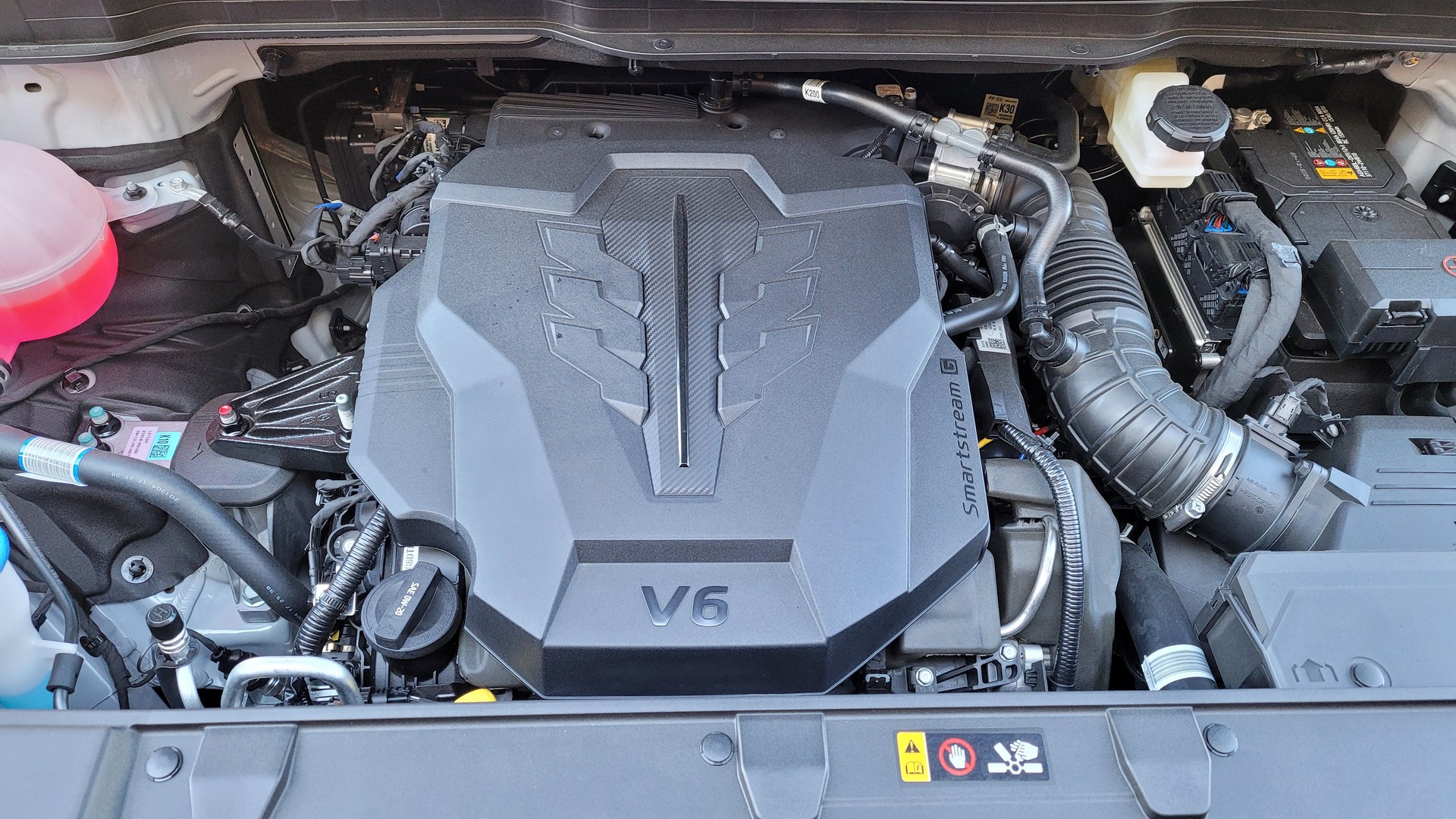 The engine is connected to a smooth eight-speed automatic transmission, which sends power to the front wheels. While a handful of minivans offer all-wheel drive, Kia believes customers looking for all-weather traction will simply buy a crossover. However, they left the door open for an all-wheel drive variant as the company is “always studying the marketplace” and “could respond accordingly” if there is enough demand.

While the Carnival isn’t a crossover, it certainly drinks like one as the van has an EPA-estimated fuel economy rating of 19 mpg city, 26 mpg highway and 22 mpg combined. That’s slightly worse than the Pacifica and Odyssey, which are both rated at 19 mpg city, 28 mpg highway and 22 mpg combined. All three are bested by the Toyota Sienna, which uses a hybrid powertrain to return 36 mpg across the board.

A Minivan With A Sport Mode 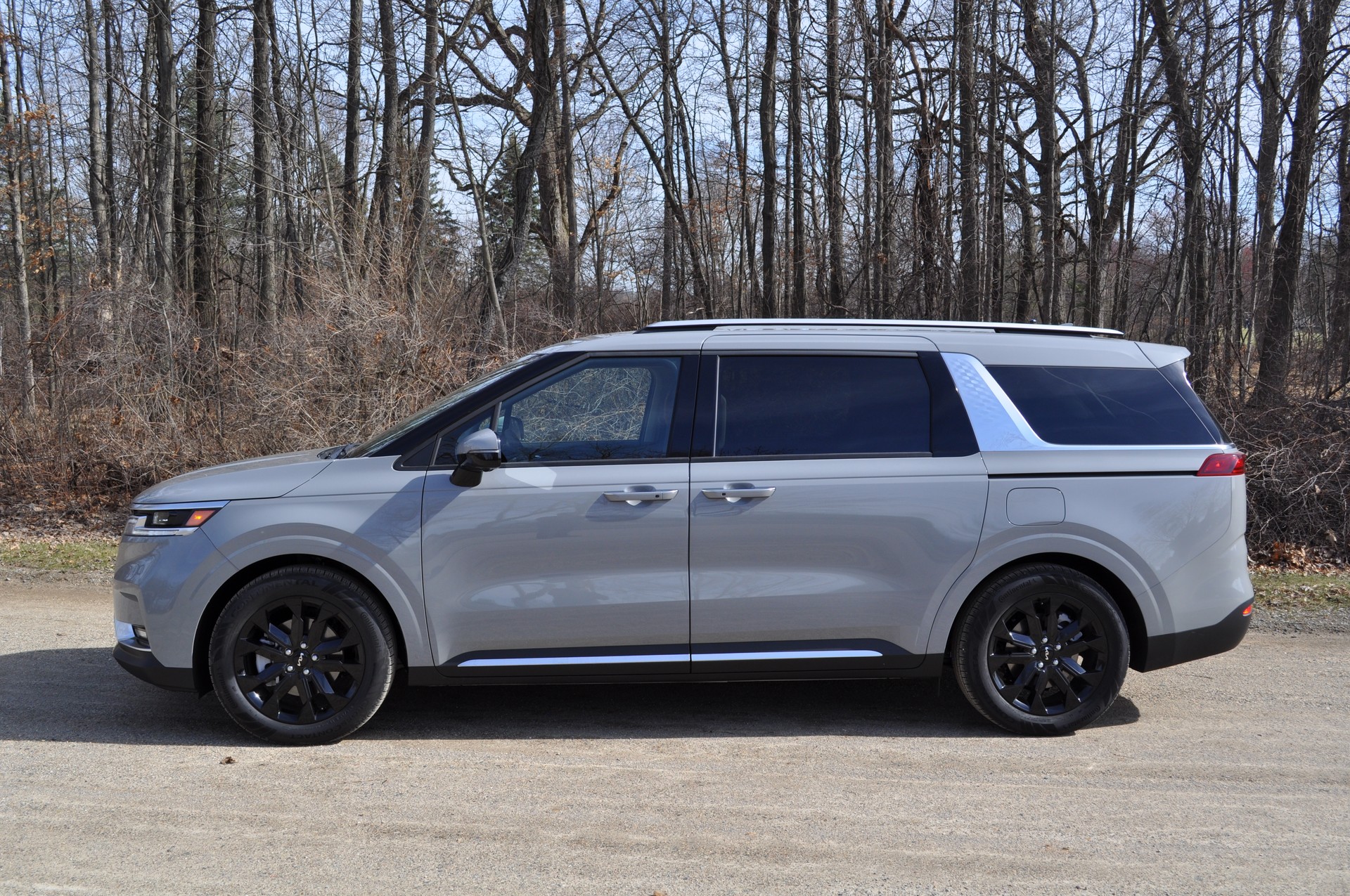 Minivans aren’t known for their driving dynamics, but the Carnival isn’t a torture for enthusiasts. This can be chalked up to a variety of things including the N3 platform, which also underpins the Sorento and K5. The architecture uses hot-stamped parts and ultra-high-strength steel for increased torsional stiffness, and the end result feels pretty solid. That being said, there was a rattle coming from the rear passenger side every time I drove through my pothole-lined neighborhood.

The suspension features MacPherson struts and a multi-link rear and is unsurprisingly geared towards comfort. On smooth roads, the ride is great but things are more mixed on less than perfect pavement. A few impacts seemed a bit harsh, but the ride is reasonably comfortable without feeling floaty.

The same can be said about the steering, which is light and isn’t particularly engaging. Sport mode livens things up a bit, but you should keep your expectations in check. 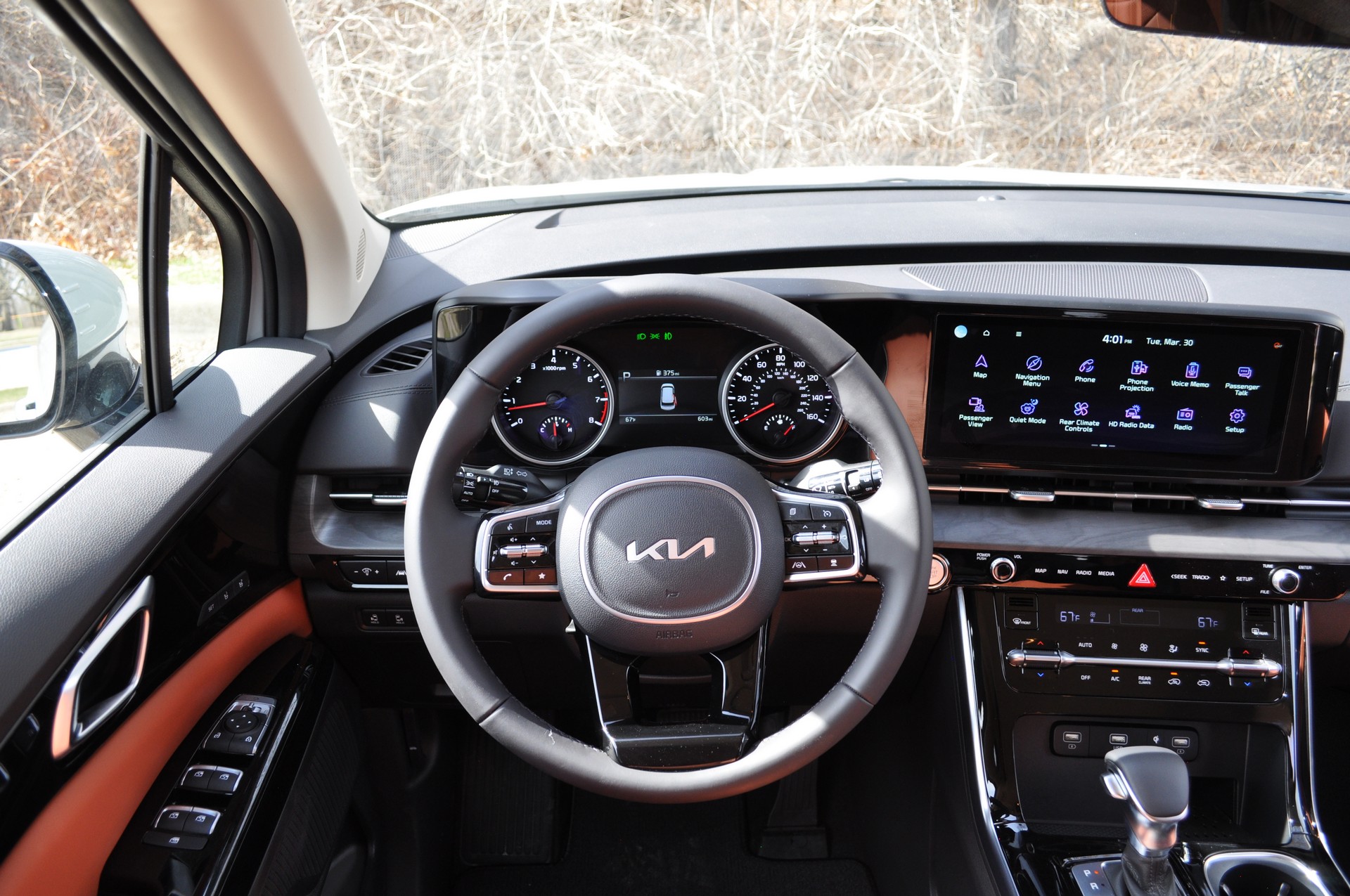 When it comes time to dance, the Carnival takes corners well but the experience isn’t very rewarding. On the bright side, body roll is largely kept in check and a bit of personality shines through. The 12.8 inch (325 mm) discs at all four corners bring the van to a halt with ease. They’re stronger than they let on and the pedal has a natural feel.

Last but not least, the cabin is fairly quiet as all Carnivals are equipped with an acoustic glass windshield. The SX and SX Prestige go even further as they add acoustic glass to the front doors. That being said, wind noise makes itself known at speeds in excess of 55 mph (89 km/h). 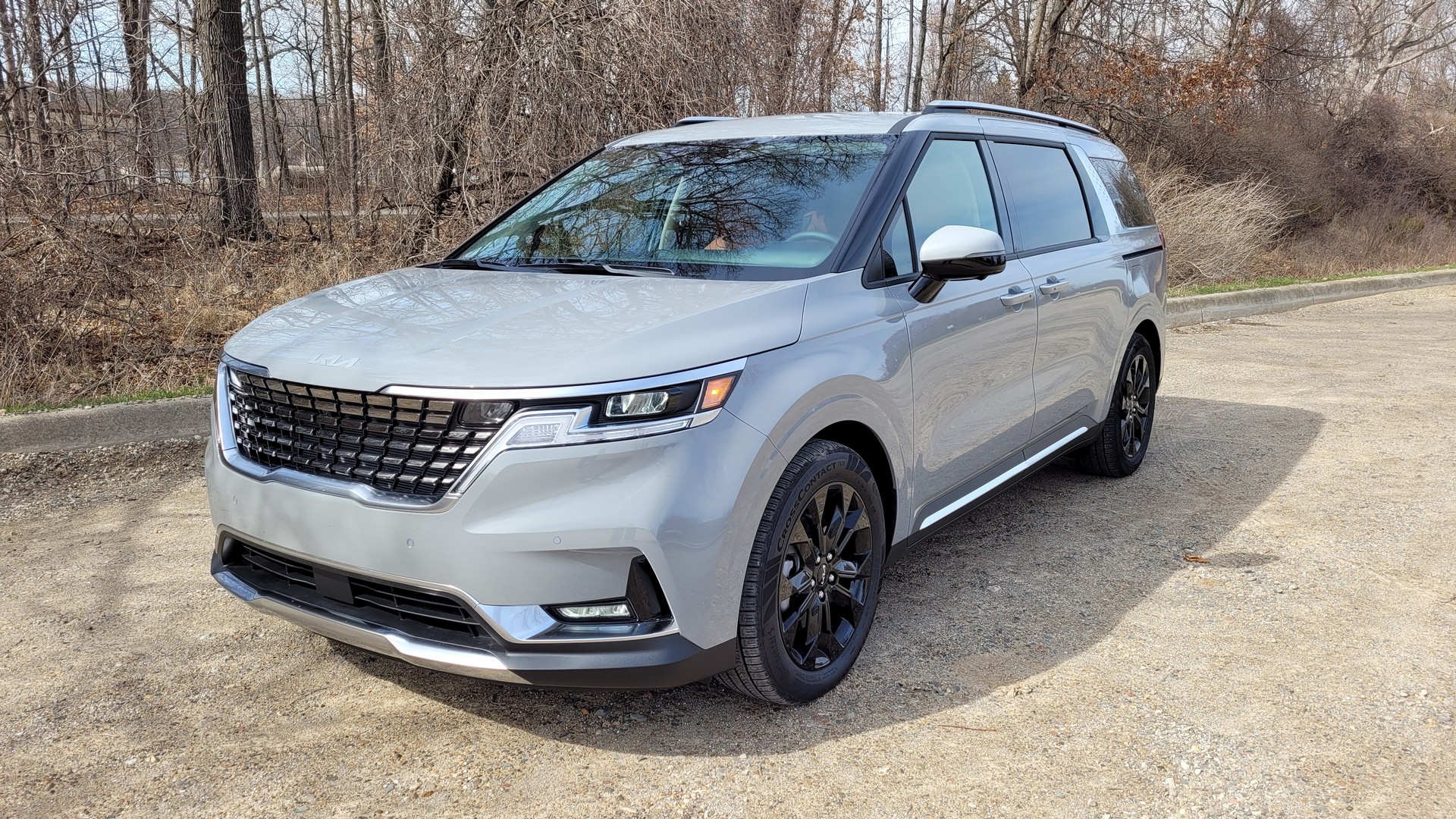 Despite offering more cargo room than a Chevy Suburban, the Carnival LX starts at $32,100 before a $1,175 destination charge. It comes nicely equipped with LED headlights, power sliding doors and 17-inch alloy wheels.

Moving into the cabin, drivers will find a 4.2-inch LCD display in the instrument cluster as well as an 8-inch infotainment system with wireless Android Auto and Apple CarPlay. Other highlights include a six-speaker audio system, front and rear air conditioning, and seating for seven. Speaking of seats, there are sliding and removable second-row captain chairs as well as a split-folding third-row. 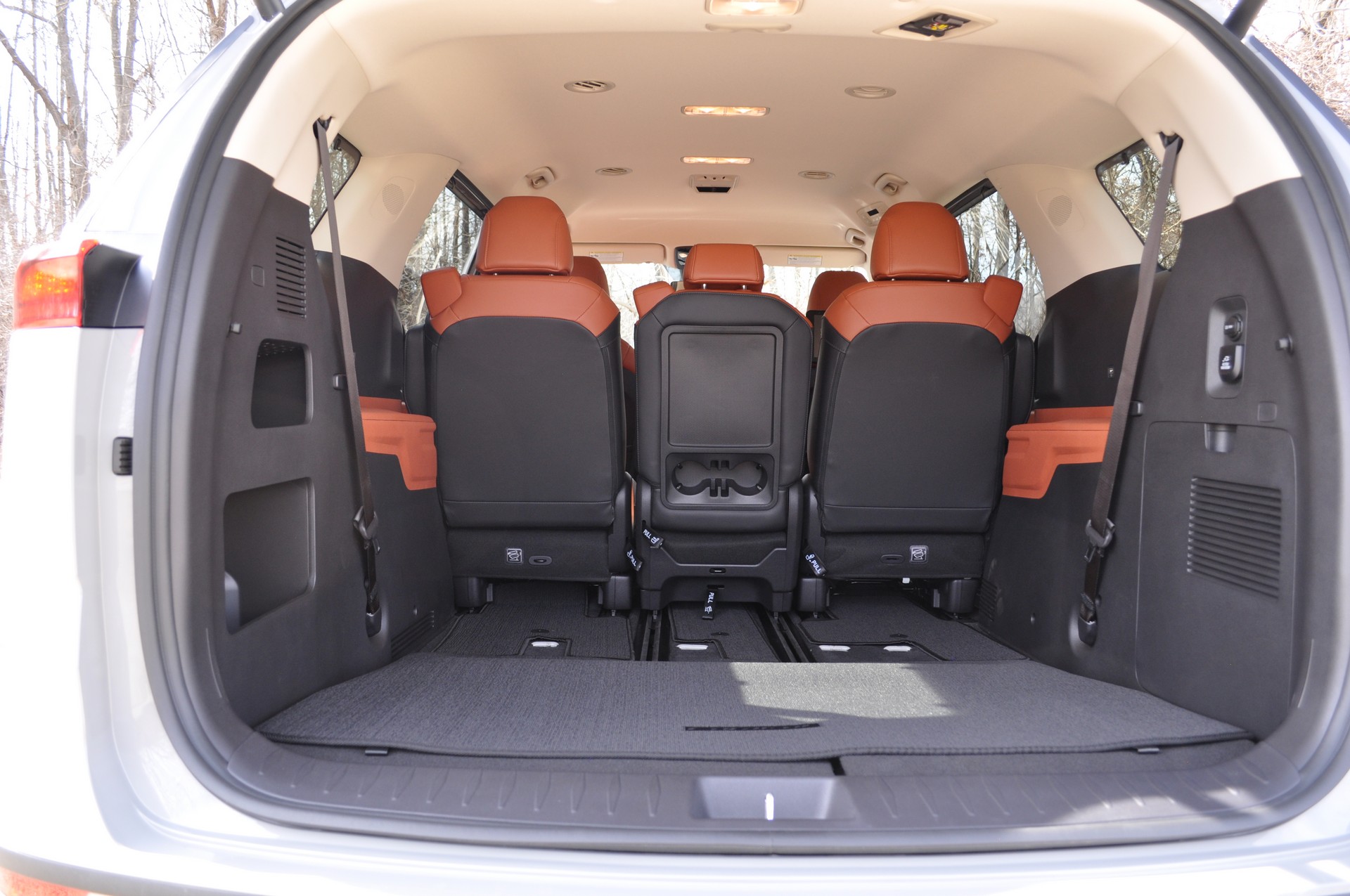 Moving up the trim ladder is the Carnival EX, which begins at $37,600. It features a lightly revised exterior with 19-inch alloy wheels and a power liftgate with a hands-free function.

The eight-seat interior is trimmed in artificial leather and features an eight-way power driver’s seat with lumbar support. It also has heated front seats, a leather-wrapped steering wheel, a tri-zone automatic climate control system, and a 12.3-inch infotainment system with GPS navigation. Drivers will also find woodgrain trim, a wireless smartphone charger, and an upgraded eight-speaker audio system. Rounding out the highlights are rear sunshades as well as the aforementioned cabin camera and intercom system.

On the safety front, there are front and rear parking sensors as well as a more advanced Forward Collision Avoidance system with cyclist detection. The model also has Highway Driving Assist and navigation-based Smart Cruise Control with a Stop & Go function. 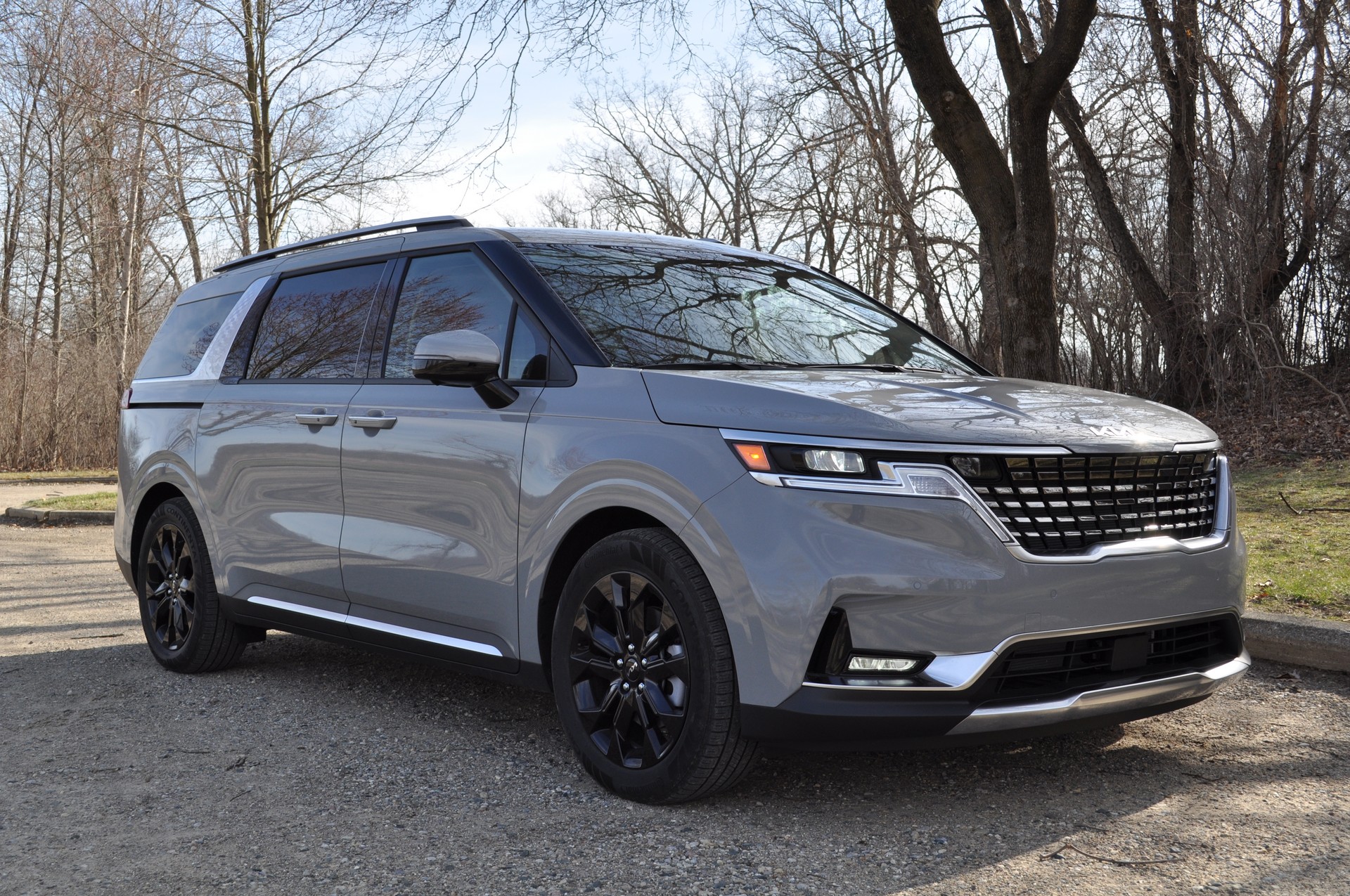 The $41,100 Carnival SX has a more distinctive appearance as it wears a matte chrome grille, satin chrome accents, faux skid plates and roof rails. Other highlights include LED fog lights, power folding side mirrors and 19-inch alloy wheels with a black finish.

Inside, there are heated and ventilated front seats, an eight-way power passenger seat and 115V outlets. Other niceties include a rear seat entertainment system, a surround view monitor and rear parking collision avoidance.

Sitting at the top of the range is the $46,100 SX Prestige. It boasts a 12.3-inch digital instrument cluster, a sunroof and genuine leather upholstery. This model also has a heated leather steering wheel, an auto-dimming rearview mirror with HomeLink, a blind-spot view monitor, and a 12-speaker Bose audio system with a subwoofer.

Of course, the stand out feature is the aforementioned VIP lounge seats. While they’re certainly cool, they’re not removable and this limits the van’s usefulness.

A Minivan That Stands Out From The Crowd

The Carnival might be a minivan in denial, but that doesn’t mean it’s a bad minivan. Quite the opposite as it’s spacious and comfortable, while offering a number of unique features. On top of that, it looks great and has an upscale interior with high-end amenities. Pricing is also competitive as it costs thousands less than the Pacifica and Sienna, and is only $10 more than the Odyssey.

At the end of the day, the Carnival is an interesting option and a big improvement over the Sedona.  While it might not win over crossover fans, the competition has been put on notice.