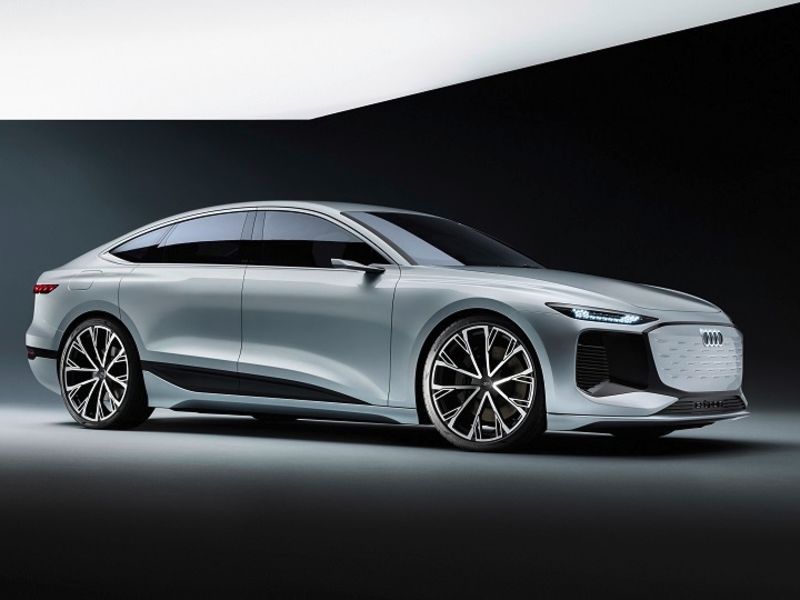 Audi will sell the A6 e-tron full-electric car alongside the standard A6 internal combustion engine models when it goes on sale in early 2023.

The concept has a 100 kilowatt-hour battery that when applied to production models will allow a range of over 700 km (435 miles), Audi estimates.

The car is “95 percent” of what the production car will look like, Audi exterior designer Wolf Seeger told journalists during an online preview ahead of the show.

The production A6 e-tron will be the second Audi to be built on the PPE (premium platform electric) architecture developed with Porsche and will follow the Q6 e-tron large SUV due to be launched in the second half of next year.

The A6 e-tron will be the first electric Audi to be given the same name as an existing model and offered alongside internal combustion engine versions. However there are no similarities between the A6’s MLB platform and the A6 e-tron’s PPE platform, Audi said.

The A6 e-tron most closely resembles the A7 Sportback in size and profile but the decision was made to instead to give the car the A6 “master name” of the model series, an Audi spokesperson said. “It’s a new member of the A6 family. We wanted to make that clear,” the spokesperson said.

Audi said it decided to preview the A6 e-tron ahead of the Q6 e-tron to highlight the breadth of future upcoming electric models within the brand. “We wanted to show a flat-built classic Audi bodyline to demonstrate that e-mobility at Audi is more than just SUV concepts,” the spokesperson said.

The electric-only PPE platform packages batteries into the floor and will underpin models from A4-sized midsize cars up to A8-sized large sedans, as well as SUVs. Station wagon versions of lower cars will also be included.

“The flat floor now allows us to also equip the model styles popular among customers such as the Sportback,” Johannes Arneth, PPE development engineer, said in the presentation.

The top-end models will come with an electric motor on each axle for a combined power output of 469 hp and a 0 to 100 kph (62 mph) acceleration time of below four seconds, Audi said.

Entry rear-wheel-drive models with a single electric motor will reach the same speed in less than seven seconds.

Charging is fast thanks in part to the 800-volt electric architecture, with a 10-minute charge adding 300 km of driving range.

The concept’s design emphasizes its electric powertrain with a closed-off version of Audi’s ‘singleframe’ grille and a sculpted area inlaid with black on the lower sides of the car near where the batteries sit.

The slim headlights use three rows of LEDs that can be configured to project different daytime running light patterns.

The light units at the front and rear wrap round the side of the car “underscoring the horizontally aligned architecture of the vehicle body,” Audi said.

Three light projectors on the side of the car “transform the ground into a stage” when the doors are opened, while turn indicators include separator projectors that show pedestrians the car’s intended direction of travel. Audi did not install an interior in the concept.

Audi revealed the Q4 e-tron compact SUV on April 14. The Q4 e-tron will go on sale in Europe in June and in the U.S. toward the end of the year. It’s the first Audi based on parent Volkswagen Group’s MEB electric-only platform that also underpins the VW ID3 compact hatchback and ID4 compact crossover.

The A6 e-tron and Q6 e-tron will share their PPE platforms with the electric Macan, which launches next year as Porsche’s first PPE-based model.

Audi and Porsche plan to sell 7 million cars based on the PPE platform by 2030, Audi CEO Markus Duesmann said at the brand’s annual press conference on March 18.