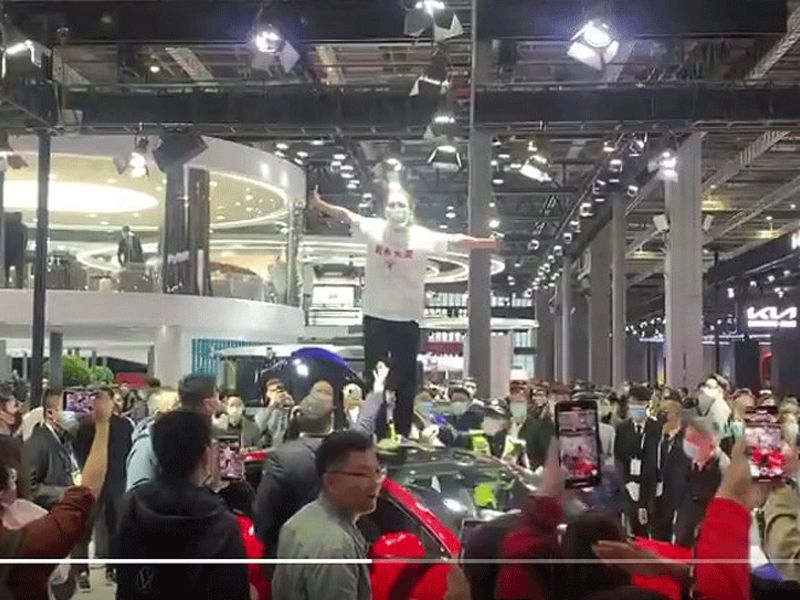 Tesla Inc. looks to be coming under increasing pressure in China with two government entities firing off missives about the company’s behavior and treatment of its customers in a single day.

The trouble started early on Tuesday when China’s state-run Xinhua news agency released a piece that said the quality of Tesla’s EVs must meet market expectations in order to win consumers’ trust. The California-based company should address consumer hesitation over purchasing its cars after issues ranging from malfunctioning brakes to blazes during the vehicles’ charging emerged, the article said.

A few hours later, the Commission for Political and Legal Affairs of the Communist Party of China Central Committee weighed in, posting a commentary on its WeChat account that said the automaker should respect Chinese consumers and comply with local laws and regulations. Making an effort to find the cause of problems and improve features is something any responsible business should do, and Tesla hasn’t done that, the Communist Party body that oversees China’s police, prosecutors and courts said.

The blowback would appear to stem from an embarrassing incident Tesla faced on Monday at the Shanghai Auto Show, one of the world’s premier car events.

An angry protester climbed on top of one of its display vehicles shouting that her car’s brakes had lost control. She was live-streaming earlier from near Tesla’s booth before staging her protest, which was captured by scores of onlookers who then uploaded the footage to the internet, helping it to go viral on social media. Tesla’s booth at the show on Tuesday had a noticeably increased security presence.

The woman, a Tesla owner from Henan, “is widely known for having repeatedly protested against Tesla’s brake issue,” the company said on Monday, adding that it will work on solutions but “never compromise against unreasonable demands.” She will be detained for five days, local police said.

Videos that went viral on Monday showed the woman, idenitified only by the name Zhang, wearing a T-shirt emblazoned with the words “The brakes don’t work” and shouting similar accusations while staff and security struggled to restore calm.

Late on Tuesday, Tesla issued a statement apologizing for not addressing the customer’s complaint in a timely manner, and said it would conduct a self-inspection of its service and operations in China.

Tesla sells roughly 30 percent of its cars in China, made at its Shanghai factory. But it has faced occasional criticism over issues such as complaints of battery fires.

The unwanted publicity comes at an uncomfortable time for Tesla, which since it broke ground on its Gigafactory in Shanghai in early 2019 has enjoyed a dream run in China, receiving all-important support from the government and appearing to skirt the tensions between Washington and Beijing.

The world’s biggest maker of EVs has extracted perks other international companies have struggled to obtain in China, the No. 1 global EV market, including tax breaks, cheap loans and permission to wholly own its domestic operations.

But over the past month, Tesla has had to defend the way it handles data in China and had its cars banned from military complexes because of concerns about sensitive information being collected by cameras built into the vehicles. After that order, CEO Elon Musk strenuously denied the company would ever use a car’s technology for spying and Tesla’s Beijing unit said cameras that are built into its EVs aren’t activated outside of North America.

Tesla has been called out by Chinese regulators over quality and safety issues before, including battery fires and abnormal acceleration. In early February, it was forced into issuing a public apology to China’s state grid after a video purportedly showed staff blaming an overload in the national electricity network for damage to a customer’s vehicle.

Tesla’s China honeymoon appears to be coming to an end at a time the U.S. automaker is facing increasing competition from a slew of younger, cashed up local EV players like the U.S.-listed Nio Inc. and Xpeng Inc., which also enjoy the support of municipal governments.

Their presence at this year’s Shanghai Auto Show was telling, with their large, shiny booths overshadowing exhibits from some of the more traditional carmakers.

For all the hype over these newer entrants, however, Teslas remain hugely popular in China, the world’s biggest car market for conventional automobiles as well. A record 34,714 China-built and imported Teslas were registered in the country in March, almost double the 18,155 registrations in February, when the week long Lunar New Year holiday slowed sales, and almost triple the number a year earlier, when the nation was in the grip of coronavrius lockdowns.

The pushback against Tesla comes as other Western brands also face greater scrutiny and become ensnared in geopolitics. Swedish clothing giant Hennes & Mauritz AB was earlier criticized by state entities for an old statement on its website about forced labor in the contentious Chinese region of Xinjiang, while there has been a marked increase in nationalism among some Chinese consumers, with campaigns to buy local brands gathering pace.

Reuters contributed to this report.