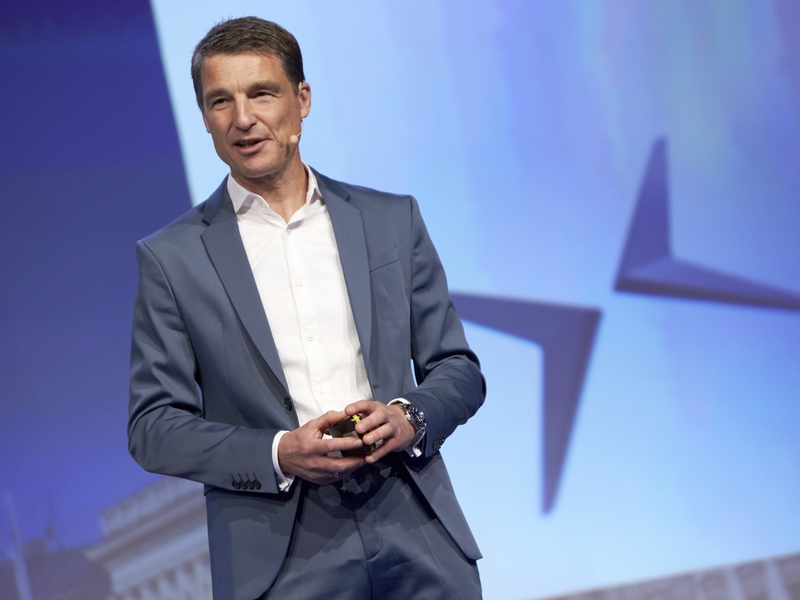 Polestar’s plan to go public this year via a merger with the special-purpose acquisition company Gores Guggenheim forced the Volvo Cars subsidiary to do something it had declined to do since it was born in 2017: provide detailed sales and financial targets.

Polestar CEO Thomas Ingenlath said that revealing the electric car maker’s midterm plan — which includes boosting sales to 290,000 by 2025 from 29,000 last year and reaching breakeven in 2023 — was “absolutely terrifying.” But making its targets public has been a great motivator, he added.

He also explained how Polestar was spared from the worst of the chip crisis and revealed a big change the company has made in the U.S. during an interview with Automotive News Europe Managing Editor Douglas A. Bolduc. Here are edited excerpts.

Q: Polestar has provided a detailed sales and financial outlook for 2021-25. Was that terrifying or liberating?

A: It’s absolutely terrifying. But this is required if you want to go to the public markets. Making a public commitment helps you to strive toward a goal in a way that you would have never done if you had kept the target a secret.

Was the backlash against SPAC deals a concern?

When we started this process, there were already some questions about the big hype around SPACs. That is why Polestar decided to do this together with Gores Guggenheim, which is an experienced partner that has done a number of successful SPAC deals. I think Alec [Gores, chairman of Gores Guggenheim] and his team are very thoroughly working on what they have to achieve. Then we’ll see how everything proceeds in the spring. We are confident there’s nothing that will prevent this from coming to a successful finish.

How do you address the risks created by Polestar’s heavy reliance on production in China, which has tense trade relations with the U.S.?

The picture that you draw is of today. In the future, we will have U.S. production in South Carolina, starting with the Polestar 3. As our lineup grows, we will go to Europe, because we want to have production in all three major regions. Therefore, we will not end up being China-dependent with our production.

Volvo builds the Polestar 1 at a factory in Chengdu, China, and the Polestar 2 in Luqiao. Would you consider assembling the two models at the same plant to maximize efficiencies?

We don’t put all our cars into one factory because with our business model, we go where that architecture is already in production. We see this as beneficial because it doesn’t matter that the Polestar 3 is in another factory because this isn’t an additional investment for us.

If it goes together with Volvo’s future electric flagship SUV in Charleston, that is fine. We simply follow where the car’s architecture is being produced. We just have to make sure that the technology we need is implemented in that factory and that it’s possible to fit our car in there.

How much of an impact has the chip crisis had on Polestar?

We have some leverage because of the size of our company. Everybody understands that we are in an important growing phase and that we are very much dependent now on one product (the Polestar 2). That means we don’t have the opportunity to maneuver around between different products and plants.

When we set the target for 2022, we did so with the chip shortage in mind. So far, we have had no reason to adjust our outlook downward, but who knows how bad things will be.

With Volvo going all-electric, how will Polestar differentiate itself?

The aim of the Polestar range is to be sportier and to have a stronger focus on the driver. Even if it’s an SUV such as the Polestar 3, it will have a sleek silhouette, meaning there will be less emphasis on cargo space and more emphasis on the propulsion. It will also have a more daring design. I have always said that a Volvo should not provoke people. It should have a very high acceptance from each and every customer profile. A Polestar will be more progressive and avant-garde; therefore, it will not be loved by everybody, but it will address its fans.

How is your strategic plan different today from what it was when you and your colleagues were creating the company?

When we started the plan, the U.S. was basically nowhere when it came to EVs, and suddenly it has grown to a market with wide acceptance. Since we planned on being in the U.S. from our start, we could adapt very quickly to the change, which has allowed us to rapidly ramp up from four Polestar Spaces to 25.

In Europe, the first seven markets we chose have been participating very nicely in the strong EV growth there. And when we started, China was not so far ahead of the other markets when it came to premium electric cars.

The U.S. has been a pleasant surprise for Polestar. Has that led to any changes to your marketing?

Our approach has changed a lot in the U.S. The biggest sign of how much came in the autumn of 2021 when we switched our advertising to a countrywide spread. Before it was always concentrated on locations where we saw or anticipated high uptake of EVs. This shows that EVs are no long a regional or local topic in the U.S. It has a much broader reach and appeal.

Volvo wants half of all global sales to be done online by 2025. Polestar already uses the Web for all sales. How many of these are truly online, and what percentage is done at one of your Polestar Spaces or pop-up stores?

This would imply a very strict separation between the two, but that was never our idea. What we know is the test drive is a super important element for everyone. Therefore, it’s a given that you need to offer the customer the opportunity to have some contact with the product. This mostly happens at a Polestar Space.

What we also have found out is that the overwhelming majority of customers have no problem doing the financing and other aspects of the deal on their mobile device. If they need additional help, they can get it via an online chat or by going to a Polestar Space. Instances in which a customer does everything at a Polestar Space, including buying or leasing the car there, are very rare.

Will your retail model of mostly having urban showrooms be tweaked once the higher-volume Polestar 3 arrives?

This is already taking place. In the U.S. last year, we went from four to 25 Polestar Spaces. This definitely will accelerate with the increase in volume that will come with the arrival of the Polestar 3. It is happening in all the countries where we are active as we move from being in the big capitals to the next wave of locations.

Are you seeing an indication that the interest in EVs is growing beyond the major cities where Polestar is active?

Yes. An example showing that EVs are gaining wider acceptance came this summer when we opened a pop-up charging station as a kind of promotional event. We decided to put it halfway between Stockholm and Gothenburg.

The first day we opened, all the test drives were taken. These were local people in the middle of nowhere who would have never gone to Stockholm and Gothenburg for a test drive, but they were happy to try an EV when we came to them.

That clearly gave me an indication that there is a certain group of customers who will be open to the brand once it comes closer to them.

Yes. By then we want to grow to 290,000. It’s very clear a lot has to happen in the next few years to achieve such a volume. We will expand into more markets and increase the size of our lineup by adding the Polestar 3, 4 and 5. This will give us a product portfolio with two SUVs (the Polestar 3 and 4) and two fastback sedans (the Polestar 2 and 5).

We will be helped by the switch from combustion engines to electrification. I imagine this will keep increasing, causing a snowball effect. The more EVs that are driven around, the more people will be exposed to them and the more the infrastructure will grow. That will be a nice dynamic in this field.